According to the doctors, Amy should never have lived to see all seven of her grandchildren. Ten years ago, just before retirement, she was diagnosed with an advanced cancer of the uterus that had spread to her colon. Her doctors estimated she had little time to get her affairs in order. But Amy decided to fight back. She endured through three surgeries, chemo, and radiation. Although Amy's body was so weak that she was confined to a wheelchair and unable to even lift her head, she continued to believe in herself. With the support of her oncologist, her family, and the prayers of her church family, she embarked on journey of healing that not only included Western medicine, but acupuncture and other Eastern therapies as well.

One day, a friend invited her to come to her dance lessons, and Amy came to watch, wheelchair and all. That was a turning point in Amy's mind. She believed she could do it. She was going to dance! Now, ten years later, Amy and her husband are on the dance floor, kicking up their heels every week. They are enjoying their grandchildren, and have just celebrated their 50th wedding anniversary.

Here is Amy's pearl: "Parents should give their children the encouragement they need to feel good about themselves. Self-esteem and self-confidence are so important in their young lives growing up. They just need to know that they are their own person, and that they can do and be whatever they want to do and be. One thing they will never need is to have their parents (or any other adult) put them down. Help give your children the confidence to believe in themselves!"
Posted by docmom at 7:08 AM No comments:

As I was looking over my reading list recently, I thought it would be nice to ask for a "pearl" from the mother of Richard Carlson, the author who is best known for his "Don't Sweat the Small Stuff" series. Judging by Richard's philosophy and outlook on life, I would suspect that Mrs. Carlson is a wise and wonderful mother and grandmother.

In checking out the "Don't Sweat" website however, I was saddened to discover that Richard had just passed away at the young age of 45. He was on a flight from San Francisco to New York City last December 13th, and died of a pulmonary embolism, resulting in cardiac arrest. Richard was the best selling author of 30 books, which focused on the themes of kindness, patience, gratitude and generosity.

Athough he didn't live long enough to enjoy "Grandpa" status, Richard's books are chock full of wise and wonderful pearls. Even if you've read his books before, pick one up and read it again. I guarantee that you'll learn something new. His words seem all the more powerful, now that his too-short time on earth has come to an end. You can read more about Richard's life on his website: www.dontsweat.com.
Posted by docmom at 6:51 PM No comments: 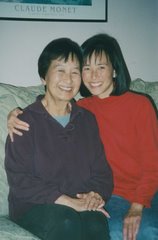